In the summer of 1971, four snorkellers; Ruairi O’ Brien, Pat Murphy, Liam Fortune, and Jimmy McMahon met on Nethertown beach.  Discovering they shared an interest in exploring the hidden depths beneath the waves, they decided to form a dive club. Following an advertisement in the Wexford People Paper a first meeting was held on the 9th of October in the Castle Manor Hotel, Ferrycarrig. This resulted in the formation of the first committee consisting of the aforementioned people along with Edmund O’ Byrne, John Weldon, John Meyler, Billy Colfer, Bernard Macken (RIP) and Denis Martin. Denis has been a perpetual member of Wexford Sub Aqua Club since its foundation and an inspiration for those who follow in his footsteps. 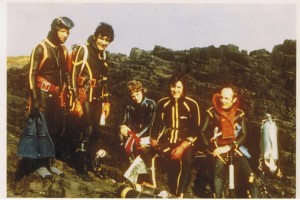 In 1972, affiliation was sought to Comhairle Fo-Thuinn (Irish Underwater Council), the governing body for diving in Ireland. Since then, our members have gone on to hold several positions on this organisation’s Technical Commission, helping promote diving and safety in the country. To attract new members, the first pool training was held in Kelly’s Hotel in Rosslare Strand.  As there was no Irish diving course at that time, training followed the British Sub Aqua Club template.  Every year since then, the club has continued the tradition of taking on new members and teaching them to international standards.

Quickly the club increased to 26 members and assistance was received from the Waterford Sub Aqua Club to help train snorkellers and divers.  The first club diver test was held in Hook Head in 1975 and this exam qualified our members to dive to 30 meters and initiated their path along the road to becoming instructors.

Unlike today, equipment was not readily available.  The first wetsuits were hand made in members’ houses.  Suit measurements were sent to Aqua Equipment in the UK who for £20 sold rolls of four millimeter neoprene with patterns marked in white chalk.  These were cut out, glued together and yellow tape applied over the seams.  Over time, members acquired dive cylinders and regulators for around £60 and by 1973 members had about six sets in total with a communal club bottle which was fought over many times!

Early boat diving from Kilmore was organised using Willie Bates’s “Mystical Rose” and Jack Devereux’s “Pride of Leinster” fishing trawler.  Groups of smaller boats owned by club members visited the many sites including Tuskar, Black Rocks, Brandies, Conings, Saltee Islands and the Hook. The first club boat was a far from ideal, a thirteen foot speedboat with a 115 hp Johnson engine. A seventeen foot Dory boat with a 50 hp Mercury followed, but could only carry six divers.  In 1990, the club purchased a Dell Quay Dory with 140 hp Johnson.  After that we switched to the more diver friendly Rigid Inflatable Boats and the first was made by Delta.  In 2004, the club membership had outgrown the Delta and we purchased a 7.5 meter Lencraft.  In 2012, the club purchased a fourteen passenger Ribcraft which we hope will give us many years of safe diving.

In the early years, the club held many camping trips to the Hook peninsula, usually pitching tents around the Lime Kiln area between the Schlesien wreck and the lighthouse.  Most diving was shore based and the Hook area suited perfectly.  We got to know every nook and cranny and explored the Royal Arthur wreck a lot as it was directly out from the camping area in about 6 metres of water.  As foreign travel became more accessible, members have used their skills to dive throughout the world, such as the World War Two shipwrecks in the Pacific and Scapa Flow, shark diving in the Bahamas, along with many locations in the Mediterranean and Red Sea.

The club’s first diving air compressor was purchased secondhand in 1973 for £700.  Three years later, a new electric compressor was purchased. This lasted until 1990 when we purchased the most modern one available for £2,230.  This compressor is still working and is used in conjunction with a Nitrox compressor, designed to remove nitrogen from the breathing gas and replace it with oxygen.  This reduces the chances of decompression sickness.

In July 2012, the club was delighted to open our new clubhouse in Kilmore Quay, overlooking the Saltee Islands.  This is a dream come through for the club and providing a home base from which we will be able to grow into the future. To construct the clubhouse required considerable drive from the members which was borne out in their labour efforts to build it themselves and to self-fund it with help from Wexford County Council.

Over the years, the club has contributed to our community and heritage by engaging in activities to protect the local marine environment. We were the first dive club in Ireland to become involved with An Taisce’s Cleancoast initiative.  Work involves an annual beach clean and the removal of any rubbish that is safe to do when we are diving. In 2011, the club won the “Coastcare Initiative of the Year 2011” award and in 2014 an Ocean Hero award.