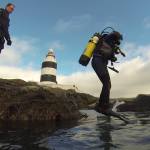 Easily some of the best shore diving in the country, Hook peninsula has a plethor of dive sites to offer for all levels. The southern tip of the peninsula is perhaps the best known site with a number of entry/exit points such as the “bathtub”, the “anchor hole” and of course the “tower hole”. 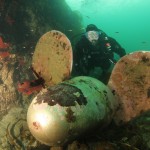 Along the west side of the peninsula there is some wreckage of “the Royal Arthur” and the “Schlesien” as well as amazing caverns that are beautifully lit by the sun through the blowholes that are commmon along the western shoreline.

Not to be left out, the east side of the peninsula boasts a number of sites too, namely Solomon’s Hole, Carragahoy  and Black Chan where the remains of a trawler wrecked in the 1960s are to be found.