The cause of a mysterious secondary explosion which led to the sinking of The Lusitania may yet become known if divers are allowed to continue investigating the wreckage, it was claimed this week. 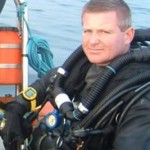 Wexford sub-aqua diver, Victor Quirke, who took part in the most recent expedition to investigate the wreck, says continuing collapses occurring within the structure of the vessel are opening up new areas for divers to explore.

Claims that The Lusitania was carrying undocumented wartime munitions have been the subject of international controversy since it sank with a loss of 1,195 lives on May 7th of 1912.

The ship was en-route to Liverpool from New York when it was hit by a torpedo from a German submarine some 11-and-a-half miles off the Old Head of Kinsale.

Mystery still surrounds the cause of a secondary ‘substantial and fatal’ blast which occurred an estimated 18 minutes after the torpedo struck.

Victor was part of a diving team, co-ordinated by Cork Sub Aqua Club, that found up to 15,000 rounds of .303 bullets in cases in the bow section of the ship when they searched it as part of licensed 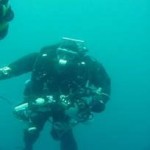 dive on the hull earlier this month.

On landing on the vessel, which is located some 92 metres below the surface, Victor and five other highly specialised deep sea diving professionals noted that new sections of the ship had been opened up through hull collapses in recent years.

High powered umbilical torches were used by the team to light up the freezing and pitch black waters and, as the men explored, they discovered a large hole in the deck of the vessel.

Continuing their explorations over three days, they, came across thousands of shells freed from their boxes by collapsed materials. 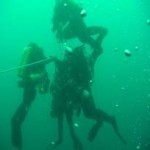 Startled by the find, the dive crew wondered: was this finally the proof needed to show the Lusitania’s own cargo may have been partially responsible for the worst maritime disaster in the country’s history. And, was that cargo placed on board illegally?

“The entire wreckage resembles a scrap-yard now,” said Victor speaking with The Echo this week.

“Its condition has deteriorated massively over the past two or three decades and much of the ship is in a very rough and brittle state. This has meant that parts of the hulls have collapsed in on the ship itself opening up new rooms and areas for divers to explore.”

The shells, however, were not what they first appeared.

On returning to land, the expedition crew checked the manifest itemising the vessel’s cargo for the fatal trip and discovered that some 2.4 million rounds had been declared to the authorities prior to its leaving Liverpool.

They also discovered a listing for some 90 tonnes of unrefrigerated butter and cheese destined for a British navy garrison. A listing fuelling speculation that other munitions were present!

Such claims have, however, always been denied by the British authorities.

The ship’s owner, Gregg Beamis, who gave his permission for the latest dive fears that unless Government restrictions on dives are lifted, clues present on board will be lost for all time.

Under a 1995 order, passed by former arts Minister, Michael D. Higgins, the area is covered under the National Monuments Act.

One of the reasons the order was issued was that Sir Hugh Lane was on board the liner when it sank. He was said to have been carrying art treasures with him – placed in lead containers in the hold.

The state is currently appealing a High Court ruling last year in Mr. Beamis’s favour, challenging the State’s refusal to grant him a licence to carry out a €1.6 million research expedition on the hull.

It’s a search Victor says he would be only too willing to become involved with if asked.

“Only a handful of divers have ever visited the wreck,” he said, “so it’s an overwhelming privilege for me to join their number. Landing on the Lusitania brings with it mixed feelings. Elation – because you’re in a place so few others have visited but sadness also at the scale of the tragedy which occurred. 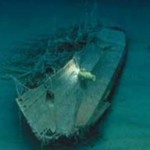 “One thing is sure though, the wreck won’t remain in tact for very much longer. It’s now 88 metres to the highest point of the ship from the surface. It was only 70 metres in the 70s giving us a fair idea of the level of deterioration involved.

“It’s more than likely, however, that if Greeg is allowed he’ll be bringing in teams from around the world specialising in salvage operations. On a personnel level, I feel that if Hugh Lane’s possessions are recovered they should go directly to a museum. If that’s agreed and I’m asked – I’ll be there at the drop of a hat.”

Reproduced by kind permission of
The Wexford Echo